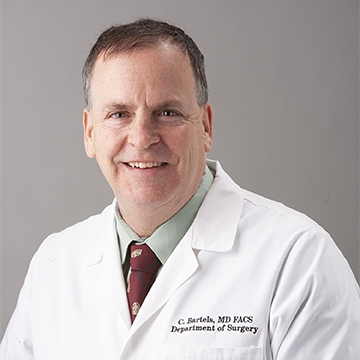 Dr. Bartels is a general surgeon who has been in practice since 1998 and who recently came to Vermont. A former Professor of Surgery at the University of Pittsburgh, Dr. Bartels has trained hundreds of surgeons across America. Dr. Bartels has a 4.9 star rating from former patients and was voted by his peers as one of Pittsburgh's best surgeons 8 years running.

University of Virginia, Doctor of Medicine, 1990

For open hernia repair, the surgeon makes a single cut over the hernia. The hernia is either removed or gently pressed back in to placed. Often, a piece of mesh is placed over the hernia location to strengthen the wall of the area.

A lesion excision is a surgical procedure of removing a spot on or under the skin that is not normal and may need to be biopsied to rule out cancer or other diseases.

A laparoscopic cholecystectomy is a minimally invasive abdominal procedure to remove the gallbladder through several small cuts the abdomen. If a patient has gallstones causing pain or discomfort, they may need to have their gallbladder removed to relieve symptoms. This procedure is performed using a laparoscope; a small, thin telescope-like instrument.